Sausage and Spinach Spanish Frittata made of potatoes, sausage, spinach, sweet peppers, and cheese. Hearty and delicious, it’s the best thing to wake up to in the morning! Frittata has got to be simplest, non-fussy egg dish to make any day of the week. You can throw in whatever bits and pieces of meat, veggies, and cheese you have in the fridge and you’ll have a breakfast, brunch (or even dinner!) meal that’s both delicious and satisfying. In this Sausage and Spinach Spanish I made and enjoyed yesterday morning, I added breakfast sausage links, sweet peppers, spinach, and Cheddar along with the standard potatoes to make it more substantial. Filling it was indeed! I had a couple of wedges early in the morning and I was good and full until late afternoon! 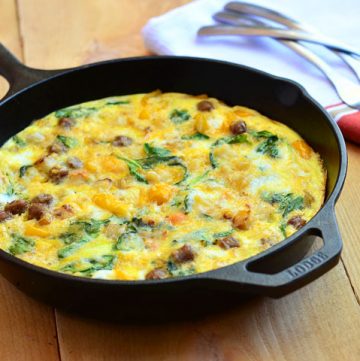